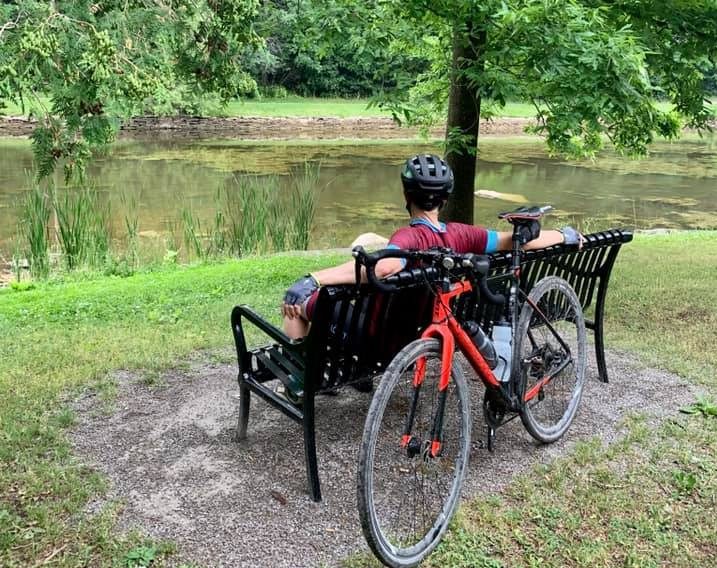 “I never do this,” Rob said. “I never just stop and look around.”

I smiled. We were 65 km through an 85k ride on the second day of our inaugural Gravelocity tour in Peterborough County.

We’d battled the wind and hills to ride out to Omemee and were cruising along the rail trail through Peterborough and back up to Lakefield. When we came upon this pretty park with a stream, I called out “Photo stop.”

It was serene and quiet, except for a few families strolling or riding by. Not far away, a four year-old girl on a tiny bike was ripping around – not just on the path, but on the grass and through the dips in the terrain. She was in heaven, and so were we.

“I never do this,” Rob repeated.

“That’s because you’re always concerned with getting back home,” I replied.

As dedicated as so many of us are to our bikes, I think it’s a fair guess to say that the time we spend on them almost always comes with some sort of constraint or deadline. When I thumb through the email chains and WhatsApp chats that my cycling friends use to organize our rides, I rarely see unconditional affirmatives. Rather, many rides are cobbled together based on some combination of negotiation, cajoling and requests for sympathy.

Can we start earlier? Need to be home by noon.

If we cut the hilly section, it would really help. Guests visiting this aft.

Distances are shortened, routes altered, start times revised. Even mid-ride, we often keep an eye on the clock – not because we’re racing each other, but because we’re racing the clock. We abandon our well-planned routes in favour of the most direct path home, sometimes even trading rolling country lanes for four-lane roadways that actually put our safety at greater risk. All because of the commitments we’ve made once the ride is over.

Today, though, our only commitment was to the ride itself – and to the weekend tour as a whole. We weren’t riding home. We were riding back to the Village Inn in Lakefield. If we had any sort of agenda at all, its only items were a post-ride coffee or ice cream and maybe an afternoon nap – all of which weren’t going to be affect in the least by a ten-minute break dedicated to enjoying the view, listening to the trickle of the stream and beaming at the toddler cyclist experiencing the same joy we feel after so many decades on two wheels.

This is what Gravelocity is all about: a true escape from the day-to-day. A vacation of the body, mind and spirit – with no deadlines and no responsibilities. It’s why the back of our jerseys reads “Free your legs and your MIND will follow.”

Let us take care of where to ride, where to stay and where to eat.

As for you…well, as Freddy Mercury sang: Get on your bikes and ride!