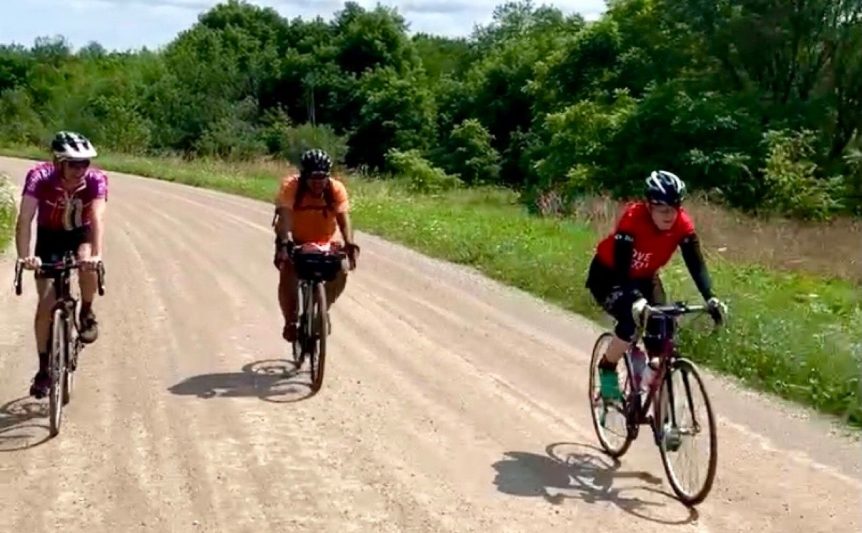 Every now and then, I’m transported back in time to when I first started riding seriously. A little while ago, our first Gravelocity Try-a-Ride was one such day.

We were riding with three friendly folks on the beautiful gravel and trails between Ingersoll and Woodstock in Oxford County. Just a perfect day for a ride – sunny, no wind and quiet, friendly roads.

One of my guests, Jason, is pretty new to gravel, and I think new to cycling in general. Prior to registering, we had texted and chatted more than a few times. He peppered me with questions about the pace, the hills and the distance. On the one hand, he didn’t want to hold up the group. On the other, he was clearly eager for the experience. I encouraged him to come out and assured him that I’d do what I could to help him along the way.

The hills on this route come early and often. None of them are particularly punishing, but hills are always a challenge to those who are new to the bike. From the start, I noticed Jason was mashing a bigger gear and standing as he climbed.

Those are two red flags in my experience. The first wasn’t helping Jason keep up and it was guaranteed to tire him out early in the ride. The second just wasn’t safe: stand up on loose gravel and you lose traction on the rear wheel. If you lose enough momentum, you’ll just topple over sideways with your feet locked into the pedals.

I sidled alongside Jason and offered up my concerns.

“Well, you paid for all those gears,” I said. “You might as well use them.”

Over the next couple of hours, I shared a number of tips:

On pedal stroke – Imagine you’re scraping poop off the bottom of your shoes.

On when to put in more effort – Let’s go hard down this roller and carry that momentum up the next one.

On how to breathe – Deep breaths when you exhale – don’t be afraid to groan a little.

Jason soaked it all up like a sponge and even though he tired, by the end of the ride, he was clearly riding better. To their credit, my other two guests shared their knowledge as well – and didn’t mind waiting and regrouping when needed.

A week earlier, I had been out on a gravel ride with my best friend Blake.

Blake has a voracious appetite for learning that has led him to pursue degrees in dance, education and ultimately a PhD in kinesiology. He’s also a qualified practitioner and teacher of Thai yoga massage, a mixed martial artist, a former marathoner and a pretty rad mountain biker. In short, Blake’s an expert in how the body moves and how we learn to move it – and he usually becomes pretty damn good at whatever he sets out to do.

There aren’t many things at which I’m better than Blake, nor would I ever consider myself fitter than he is, but on a gravel bike, things tilt in my favour (for now). We rode at a pretty good pace for most of the ride. On flatter roads, we rode comfortably beside each other. On the descents, he was no slouch. I dropped him a little, but that’s likely the result of the 20-pound difference between us (maybe more).

On the climbs, though, there was a clear difference – and that was the subject of some post-ride conversation between us. We compared notes on the differences between climbing on the road versus climbing a single-track trail.

“Shorter climbs on the trails, right?” I asked.

“Yeah, probably no longer than a couple of hundred metres most of the time,” he replied. “But it’s not just that. You seem to drop me when the hill starts. Then, even if I get back on your wheel, you drop me again as we crest the hill.”

Blake went on to say that he didn’t really observe an appreciable difference in our gearing. It just seemed that my body engaged with the change in elevation in a more positive fashion. We batted ideas back and forth – I’m sure Blake said something about anatomy and the muscles we engage when we encounter a rise in elevation, but I’m not much for retaining such things, even if I do understand them.

So what’s going on? Many times, it’s the voices. Voices and memories. When I ride down one roller, I hear the hoots and hollers of childhood friends – each of us egging the other on, revelling in the wind on our faces. As we start the climb, I see Rob passing me. He glances back with a cold stare that dares me to chase. Mid-climb, my sister Jane tells me how strong I am – encouraging me to go as hard as I want, so long as wait for her at the top. And as I near the crest, Christian’s voice reminds me “Just because you can SEE the top doesn’t mean you’re AT the top. Pedal right through the apex.”

Even if I don’t hear them consciously, it seems that my muscles do. My core tightens, my hands relax on the bars, my rear settles into the saddle and my legs engage.

But it’s not just on the climbs. My descents, cornering, leading, following, accelerating, braking, drinking, fueling, clipping in, clipping out… when I think about it, almost everything I do on the bike is the result of everything I’ve learned in a lifetime of cycling – and over the past 13 years in particular.

If you’re into cycling, there’s a good chance that you’ve at least glanced at The Rules – an occasionally tongue-in-cheek list of edicts on road cycling by a self-appointed group of fanatics who dub themselves The Velominati that range from the serious to the ridiculous [www.velominati.com].

On this point, I agree. We all start somewhere, and the vast majority of the cycling community is generous and gracious enough to remember that. For those tempted to forget it, consider the advice of former pro cyclist and current Everesting giant Phil Gaimon.

In early summer of 2020, as the Covid-19 pandemic took hold and bicycle sales boomed, Gaimon took to Instagram with a video welcoming and encouraging all those who were discovering – or rediscovering – the joy of life on two wheels. Then, he paused and said something along the lines of “Okay, if you’re new to cycling, you can stop watching. If you’re hard-core, listen up.”

Gaimon stared deep into the lens and issued a warning: Don’t fuck this up. Bicycle sales are soaring. Don’t get hung up on what people are wearing, how their saddle isn’t the right height, what gear they’re in. Don’t even cut them up for not wearing a helmet. Every person you see on a bike is another advocate for cycling – for more bike lanes, better infrastructure, stronger laws protecting cyclists and cleaner air. Petty criticism doesn’t make you cooler. It harms our community.

I like to think of the encouragement we offer and the advice we impart as a metaphorical draft we set for those who are behind us. If we measure our pace, they stick with us, and eventually, they’ll take their turn at the front.